Looking for a budget laptop for the kids? 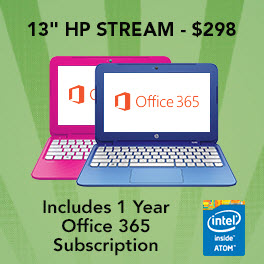 Looking for a budget laptop for the kids to take to school? Check out the HP stream 13" it’s a low powered laptop in funky colours that runs on an Atom processor which give you great battery life as well as running FULL windows 8.1 so you can install any traditional desktop Windows programs or Windows store apps. That give it a lot more scope for usability than a Chromebook, or a “big-phone tablet” like a IOS or android with a tack on keyboard.

Additionally Microsoft have announced in the last couple of days that windows 10 will be a free* upgrade to windows 8.1 when released (*details to follow).

On the negative site there is no touch screen and it is a low powered device so although you can install full desktop version of Adobe Photoshop or Premiere on it you may not want to edit the next blockbuster movie on this device.

I don't normally recommend budget laptops, your standard department store $300 laptop (complete with 4 year old technology) is certainly NOT my recommendation, but this is not “that”. This is essentially a late model windows “tablet” with a permanently connected keyboard (and no touch screen).

To sweeten the deal it comes with a year’s free subscription to office 365 (MS office 2013, plus some other benefits)

Make your own investigations as to the suitability I haven’t tested it but I have seen some good reviews and from what I have seen it looks fairly robust and if the kids drop it three times in the year you will still have change from $1000 *sad face*.